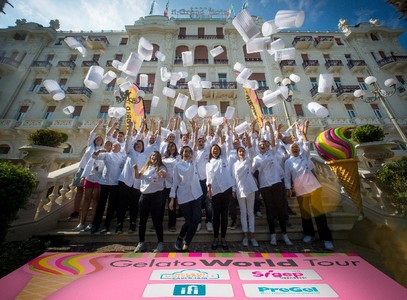 ·       On Sunday, 10 September the votes of the public will be added to those of the technical jury composed of experts and journalists to declare the "World's Best Gelato Flavor"

·       The 36 final flavors come from 4 continents and 19 nations, selected during three years of competitions involving more than 1800 participants.

·       Entry to the Village of the Gelato World Tour is free and there are a lot of activities for adults and children. The Gelato Ticket for tasting the competing flavors costs €10 (8 tastes).

Rimini, 8 September 2017 - The traditional launching of caps inaugurates the finals of the Gelato World Tour, which until 10 September will pit the best gelato artisans in the world against each other. There are 36 flavors competing, presented by just as many teams for a total of 58 gelato artisans, including 17 women, from 19 countries. The Gelato World Tour Village will be positioned along the promenade of Fellini Park in Rimini, and entry will be free with many activities designed for gelato lovers of all ages.  To taste the 36 gelato flavors in the competition there is a Gelato Ticket costing €10 which is good for 8 tastings and one vote to select the "World's Best Gelato Flavor." The votes of the public will be added to those of the technical jury composed of experts and journalists. The winning flavor will be revealed on 10 September at 8:30 pm.

The Rimini Final comes at the end of a busy season for gelato, the gelato shops in Italy enjoying record sales during the summer of 2017. Thanks to hot temperatures and just a few rainy days, initial data show an increase of 10% in the consumption of cups and cones.

"After a three-year journey that took us to 4 continents and 82 events, we are heading back to Rimini to the park near the magnificent Grand Hotel, not only to find the World's Best Gelato Flavor, but above all to celebrate the tradition of artisanal gelato. A history that started in Italy and that thanks to the creativity and commitment of artisans and skilled entrepreneurs has spread throughout the world over the course of the last three centuries," says Achille Sassoli, Director of the Gelato World Tour. "Here we are bringing 36 flavors that speak of biodiversity, local recipes, memories and love stories, all told thanks to one of the world's most beloved foods. It will be a fantastic three days. We look forward to seeing you there!"

Patrizia Cecchi, Italian show director with Italian Exhibition Group, explains, “For SIGEP the results of this long fascinating journey round the world are extremely positive. We have made our expo even better known at international level, bringing top master gelato makers to the expo centre in Rimini, as well as distributors, importers and investors. An important activity, which I think is highly original and which no competitor can boast. From today until Sunday, thanks to the collaboration of leading companies, the climax will be reached here in Piazzale Fellini, with a unique party enabling attendees to personally experience the professionalism and passion behind all artisan gelato. All over the globe.”

"2017 has been going very well for PreGel, both in Italy and abroad, as can be seen from seasonal industry data," observes Marco Casol, President of PreGel America. "Internationally festivals like Gelato World Tour offer great benefits to all the companies in the industry, helping us to spread the culture of artisanal gelato around the world and giving us greater exposure to gelato artisans who are competing and the consumers called upon to judge the flavors."

"The fact that 36 teams of gelato artisans from 19 countries travel thousands of miles and cross oceans to be here in Rimini tells you what the Gelato World Tour really represents: the true and positive synergy of a whole trade that speaks a single language - that of artisanal gelato - and that shares a sweet piece of Italy with the world," concludes Gianfranco Tonti, President of IFI.

The annual consumption of artisanal gelato across the globe is worth 15 billion euros, with an average growth of 4% per year. The SIGEP Observatory (the world's leading artisanal confectionery trade show, with the 39th edition scheduled to be held on 20-24 January 2018 at the Rimini convention center, organized by the Italian Exhibition Group) has estimated that artisanal gelato consumption in Italy during the summer of 2017 increased by 10% with peaks of 15% in tourist areas.

In Europe in 2016 there were more than 60,000 gelato shops, of which 39,000 in Italy (10,000 pure gelato shops and 29,000 cafés and pastry shops also serving gelato), with 150,000 employees. In Germany there are 9,000 gelato parlors, of which 3,300 are dedicated solely to gelato. Spain has 2,000 gelato shops. In South America, Argentina and Brazil account for the largest share, with 1,500 and 500 gelato shops respectively. The consumption of artisanal gelato is constantly growing in the United States, where there are about 950 gelato shops. The word “gelato” denotes a premium product so much so that large ice cream companies (industrial production) have been attempting to add value by using the name in marketing their products in an over saturated retail ice cream market. It is interesting to note how American statistics refer to real artisanal gelato more and more frequently.

Entry to the Village is free and there are a lot of activities planned for gelato lovers of all ages. To taste the 36 competing flavors it is necessary to purchase a 10-euro Gelato Ticket for 8 tastings and the right to express one vote for the "Taste & Win" contest: using the integrated QR Code participants choose their favorite flavors and earn a chance to win one of the great prizes. Free tickets with the online quiz in collaboration with National Newspaper Il Resto del Carlino and with the fun games organized by Radio Gamma. The lucky ones will find free coupons scattered across the city during the whole event.

History of gelato, workshops and games: activities open to the public

In addition to the display cases filled with the competing gelato flavors, the Gelato World Tour Village will spotlight countless delicious activities dedicated to food and products Made in Italy. Visitors will enjoy a delicious and creative program of events, a celebration for dessert lovers of all ages.

Every day they will be able to observe the 36 gelato artisans and their assistants at work in the large production space situated in the heart of the Village: the gelato will always be fresh and ready to be tasted. An area will be dedicated to Pino Pinguino, the adorable character created by PreGel, which offers an extra touch of flavor to the most delicious gelato, where children and families will be able to taste some gelato treats and take pictures.

Chef Silver Succi from the Quartopiano restaurant in Rimini will amaze visitors with his cooking shows dedicated to savory gelato in partnership with the Chef to Chef association. A delightful preview of another of the most loved summer events in Rimini, the circus of the Al Méni chefs.

The Carpigiani Gelato Museum will take visitors on a fascinating journey through the history of gelato with an interactive workshop (Friday at 2:30 pm, Saturday at 2 pm, Sunday at 12 noon and 6 pm).

The competing gelato artisans will also put on a show for the crowd in three exciting contests that have become favorites of the Gelato World Tour. The first is "Tonda Challenge" organized by ifi, international manufacturer of gelato display cases. Who among the gelato makers will be able to prepare the perfect cup? (Friday at 3 pm and 8 pm, Saturday at 3 pm and 8:30 pm.) While with “Guerrilla Gelato”, ifi will challenge them to deliver gelato at the beach and throughout the city with Gelato CoolBox, involving gelato lovers in original videos voted by the Facebook audience. And then there's PreGel's "Stack It High Showdown", the competition to create the world's tallest cone, battling to win the PreGel cup (Friday and Saturday at 5:30 pm).

Carpigiani Gelato University, the international gelato school with 12 campuses around the world, will present the course "Learn the art of artisanal gelato" to take a step into the world of gelato and create a fruit sorbet (Friday at 5 pm and 8:30 pm; Saturday at 9 pm; Sunday at 3:30 pm).

For film lovers every evening there will be a preview of the documentary "Gelatology", a journey through the art, passion and science of artisanal gelato (Friday and Saturday at 9 pm, Sunday at 6:30 pm).

The Gelato World Tour, which is supported by the Italian Ministry of Foreign Affairs and of Economic Development, as well as the Regione Emilia Romagna, is the first international traveling competition in search of the best flavors in the world. The Tour is directed by Carpigiani Gelato University, the world’s most renowned school for successful gelato entrepreneurs, and Sigep – Italian Exhibition Group, for thirty-eight years the world’s premier trade show for traditional gelato and pastry (next edition from 20 to 24 January, 2018, Rimini). Main Partners are IFI, leading manufacturer of gelato display cases, and PreGel, the world’s largest producer of ingredients for gelato and pastry. Technical sponsors: ”easy-to-digest” lactose free milk, yogurt and cream are provided by Zymil (Parmalat); Hiber; Medac; Metalmobil; Paperlynen Pal Caps; Cono Roma; Screams; Gelato Museum Carpigiani and Quartopiano suite restaurant di Rimini.