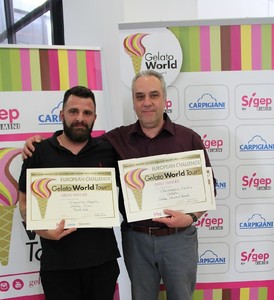 • "Salted Caramel Peanuts" of Dimitris Charalampous from the Palladion (Rhodes) and "Pastolato" of Vangelis Iliopoulos from the Gelato Punto (Rhodes) have been selected to represent GREECE in the European Finals of Gelato World Tour, being held in Bologna, Italy this upcoming July 24-25, 2017.

Athens, 9 May 2017 – Gelato World Tour’s trip around the world saw Greek gelato chefs compete on May 8 at Domestica s.a., exclusive dealer of Carpigiani of Greece.
The competition was fierce and event has put forth two flavors that will go on to represent GREECE at the Grand Finale of Gelato World Tour. They are: “Salted Caramel Peanuts” of Dimitris Charalampous from the Palladion (Rhodes), – a nutty concoction showcasing the savory flavor of Peanuts; and also from the ancient city of Rhodes, “Pastolato” of Vangelis Iliopoulos from the Gelato Punto (Rhodes), – an interesting mélange of notes coming from Honey, Sesame, Almond, Cinnamon, Orange as well as being decorated with Creole Chocolate.
The flavors “Salted Caramel Peanuts” and “Pastolato” will compete amongst the other winners from around Europe at the European Finals, scheduled for July 24-25, 2017 at the Carpigiani Gelato University campus in Anzola Emilia (Bologna), Italy. Flavor, structure and presentation are the three parameters that are judged, highlighting the choice of ingredients, the art of gelato making, and the visual impact of the gelato. See below the full list of participants.
The jury was composed of: Sozos Frantzeskos, noted Pastry Consultant and Educator in addition to being the Pastry and Bakery Supervisor at Sklavenitis Supermarkets.; Thanassis Gialouris, the Vice President and Head of Publications of Forum S.A.; Giannis Glykos, President of the Federation of Greek Pastry Professionals as well as the owner of Maron pastry shops; Dimitris Chronopoulos, a Consultant Chef specializing in the Pastry Arts.

The Gelato World Tour, which is supported by the Italian Ministry of Foreign Affairs and of Economic Development, as well as the Regione Emilia Romagna, is the first international traveling competition in search of the best flavors in the world. Gelato World Tour has visited eleven Gelato Capitals – Rome, Valencia, Melbourne, Dubai, Austin, Berlin, Rimini, Singapore, Tokyo, Chicago and Shenzhen. The Tour is directed by Carpigiani Gelato University, the world’s most renowned school for successful gelato entrepreneurs, and Sigep – Italian Exhibition Group, the world’s premier artisan-gelato trade show. In order to further fulfill Gelato World Tour’s mission to spread the culture of gelato throughout the world, Challenges, such as the Athens Challenge, are being organized around the globe!

WINNER - “Pastolato” of Iliopoulos Vangelis from the Gelato Punto (Rhodes)
List of participants: