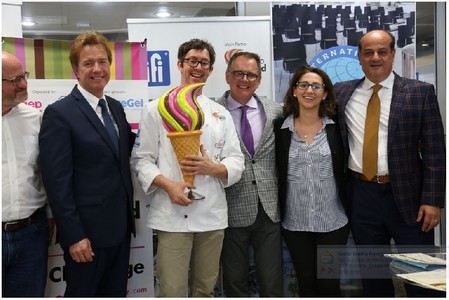 The Gelato World Tour made its way to the West Coast, Tuesday for the Los Angeles Challenge. Nine gelato artisans from all around the West Coast gathered at Rosito Bisani to compete for the chance to move on to the finals. The winner, Ron Mendoza from Monterey, CA with the flavor Bee's Knees will be moving on to the finale in Rimini, Italy this September to compete alongside 36 artisans from around the world for World's Best Gelato Flavor.

LOS ANGELES, CA. (May 3, 2017) – The Gelato World Tour made its way to the West Coast, Tuesday for the Los Angeles Challenge. Nine gelato artisans from all around the West Coast gathered at Rosito Bisani to compete for the chance to move on to the finals. The winner, Ron Mendoza from Monterey, CA with the flavor Bee’s Knees will be moving on to the finale in Rimini, Italy this September to compete alongside 36 artisans from around the world for World’s Best Gelato Flavor.

“The gelato business is definitely on the rise across the US, but especially in Southern California.  We’ve seen a tremendous increase in interest from aspiring gelatieri to accomplished chefs,” stated Mike Girgis, vice president of sales at Rosito Bisani, Southern California’s leading importer of Italian foodservice equipment.

Judges Special Mention awards were given to the flavors Cali Vibes by Davide Zambon & Primo Dal Cin and Caramelized Fig by Spin Mlynarik. All nine artisans and flavors chosen to compete in the LA Challenge were:

Judges of the event were Russ Parsons (former columnist for the LA Times, inducted into the James Beard Foundation’s Who’s Who of Food and Beverage), Chef Josette LeBlond (Culinary Institute of LA) and Sashi De (producer of Maximum Foodie television series.)

Within the competition, IFI, one of the world’s leading manufacturers of gelato display cases, conducted the Tonda Challenge. Each artisan had to scoop gelato into a cup trying to get closest to 2oz, considered the perfect serving. The winner of the IFI Tonda Challenge was Spin Mlynarik.  According to IFI’s Francesca Tonti, “Producing artisan gelato is about passion and precision … not just in the recipe and production techniques, but also in the art of serving.  We host this mini competition within the Gelato World Tour to underscore that every element of your gelato business must be precise and beautiful.”  Mlynarik, winner of the IFI Tonda Challenge is awarded the Golden Spoon trophy.

PreGel, partner of the Tour and the world’s largest manufacturer and supplier of specialty dessert ingredients, presented the first ever Gelato World Tour Flavor Innovation Award. The winning flavor was Nerone, an innovative combination of hazelnut, almond and organic California pistachio with activated carbon and Hawaiian black salt.  This flavor was the creation of Marco Saba & Andrea Racca. They also received a $500 certificate for any PreGel product. PreGel National Sales Manager, Fabio De Nadai, explained “Innovation should be paired with flavor, texture, and amazing ingredients. Innovation is also something that can make a gelato stand out from what you might normally find in a gelato shop. So, we want to give the opportunity to gelato makers to express themselves with the most incredible flavor that is both creative and delicious.”

With more than 1,600 competitors from 5 continents, the Gelato World Tour is the most comprehensive gelato competition in the world. Major stops include Rome, Valencia, Melbourne, Dubai, Austin, Berlin, Rimini, Singapore, Tokyo, Chicago, Shenzhen, New York, and Los Angeles.  Challenge stops have been held in more than 50 other cities throughout Italy, Europe, the Middle East, and South America. The prestigious Carpigiani Gelato University and Sigep – Italian Exhibition Group, the most important trade show for traditional gelato and pastry, have organized the event. Main Partners are IFI, leading manufacturer of gelato display cases, and PreGel, the world’s largest manufacturer and supplier of specialty dessert ingredients. The event is supported internationally by the Italian Ministry of Foreign Affairs, the Italian Ministry of Economic Development, and the Emilia Romagna Region.
other News