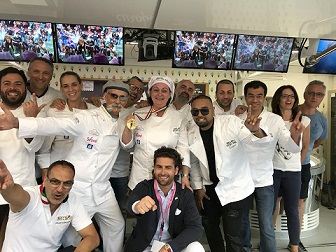 It’s over for another year, and the London Gelato Festival was thrilled last night to award Fridge Caffe’s Olga Pinciuc with the grand prize as the winner of the London stage.

Over 2 days, 10 gelato chefs competed to win, with the prize including entry into the All Stars stage in Florence in September. Olga’s Spring Melody flavor was a sorbet that included flat peach, lemon mint, an infusion of fleur tea and orange and was a hit with the public and the professional judging panel.

It’s the culmination of a fantastic 2 days in Covent Garden, where scores of people enjoyed authentic Italian gelato, and voted in their thousands. The weather played ball and a great weekend was had by all.

Winners of the other categories included:

The Gelato Festival made its debut in Florence in 2010 inspired by the idea of ​​the first gelato recipe by the architect Bernardo Buontalenti in 1559. Since then, the Gelato Festival has expanded its borders, beginning in Italy, then throughout Europe and then in 2017, - to the United States, with a total of 64 festivals, before arriving to embrace the whole planet with the world championship of the Gelato Festival World Masters 2021.