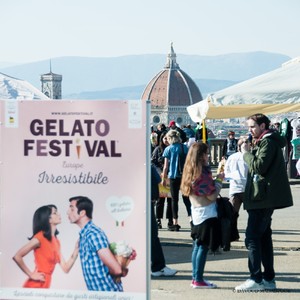 Florence, 01.09.2017
The last stage of the European tour took place in Hamburg, and now the Gelato Festival is getting ready to choose the 2017 European Champion!
After having selected the best ice cream makers in the most important cities of Italy (Florence, Rome, Milan, Turin) and Europe (London, Warsaw and Hamburg), this mouth-watering event returns to Tuscany's regional capital.
The first ever Gelato Festival was held in Florence in 2010, drawing its inspiration from the first ice cream recipe created by the eclectic architect, Bernardo Buontalenti, during the Florentine Renaissance in 1559.

In Piazzale Michelangelo, from 14 to 17 September, Europe’s 16 best ice cream makers will compete with their special flavours, especially created for the Festival, made from fine, carefully selected ingredients blended in classic, bizarre and imaginative combinations.
As always, the winner will be chosen by two panels, each of which will account for 50% of the vote: a panel of technical experts composed of journalists and sector experts and a panel composed of all the members of the general public taking part in the Festival.

Who is going to win?

Here are the 14 winners of the 2017 European competitions:

1. Ettamo Fragola by Roberta Rabatti of the Ettamo ice cream parlour in Florence. A strawberry sorbet with zesty notes of balsamic vinegar, in a heady contrast reminiscent of love itself.
2. Crema di ricotta azteca al bergamotto by Carmelo Pannocchietti of the Arà: è Sicilia ice cream parlour in Florence. What would the famous Sicilian cannolo (cream horn) taste like if it were an ice cream? Here it is… the authentic flavours of Sicily become a delicious ice cream.
3. Zabaione come una volta by Emanuele Alvaro of the Il Re Sole ice cream parlour in Rome. For those seeking traditional flavours such as egg, wine and sugar, like the ice cream of times gone by.
4. About Strawberry and Red Pepper by Vincenzo Lenci of the Bar della Darsena ice cream parlour in Fiumicino. He is not English but his wife is, hence the English name, for a flavour especially created and dedicated to her. Strawberry and peppers, in a harmonious contrast, just like the personality of a woman!
5. Miami Vice by Francesca Marrari of the Golosia ice cream parlour in Turin. This ice cream will take you on a marvellous journey across the ocean. Just taste it and close your eyes and you will find yourself on the Miami Boardwalk with a delicious coconut, pineapple and strawberry cocktail.
6. Gelato del Vignaiolo by Nicolò Arietti of the Gelati d'Antan ice cream parlour in Turin. From the farmlands of Piedmont, a gift of grapes, particularly Malvasia DOC. A sweet note accompanied by the freshness of raspberry sorbet.
ufficiostampa@gelatofestival.it
www.gelatofestival.it su Facebook Gelato Festival
7. Femminello IGP by Michela Guerra of the Bar Marea ice cream parlour in Foggia. A refreshing dip into the flavours of Apulia. This IGP lemon, the Femminello Garganico, blends harmoniously with the sweet almond of Toritto, creating a fresh, light, clean flavour.
8. Il mio primo vero latte by Massimiliano Scotti of the VeroLatte ice cream parlour in Vigevano. Brunilde milk fresh from the cow, honey and rice from the Po Valley plantations. These are the authentic ingredients of an ice cream that takes you back to the gentle embrace of your mother's arms.
9. Creme dela Baklava by Akash Vaghela of London’s Creme Glacee ice cream parlour. London offers an ice cream that tastes of Baklava, a luxurious sweet dessert that originated in Tunisia but is now served all over the world. Enriched with delicious pistachio grains.
10. Scottish Raspberry by David Equi and Kaelin Halcrow of Equi's Ice Cream in Hamilton (UK). Scotland is home to the most luscious raspberries. Red jewels transformed into an ultra-fresh sorbet, dedicated to all the women of Europe!
11. Plums by Peter Bertoti by the "Quattro si" ice cream parlour in Pruszkow. An innovative idea of sorbet, based on plums with a flavour all of their own. In line with Polish confectionery traditions, a touch of cinnamon creates a brilliant and totally innovative combination.
12. Inne lemon curd by Giacomo Canteri of the Limoni ice cream parlour in Warsaw. This is not just a mere lemon sorbet, but a fresh cream with a hint of vanilla that exalts this aromatic, yellow fruit typical of Southern Italy.
13. Wild Cherry - Great Freedom by Taseer of London’s Fabulous Ice Fires ice cream parlour. Like the Beatles, they were born in England and grew up on the Reeperbahn, hence the taste. A sorbet with a funky rhythm consisting of 4 types of cherries and a fifth secret ingredient. The Sweet Red and the Dark cherries come from England, the Saurkirschen sour cherry from Germany and the Selvaggia black cherry from Italy blend to delight the palate with a wild sensation of freedom and joy!
14. Communis fortis by Francesco Bontempo of the Cristallino ice cream parlour in Bad Tölz. This flavour features the ice cream superstar, pistachio, with an incredible mix of nuts and raisins. An ice cream made of almond milk and hazelnuts and topped with mixed nut grains.
Two special selections are also entitled to enter the European Final:
15. Nonna Rosa by Lucia Cosentino of the Marrons Glacés ice cream parlour in Catanzaro (selected by Trofeo Punto.it, the sector’s leading trade journal, official media partner). A flavour inspired by the unmistakeable aroma of homemade cakes, that sweet and wholesome taste that only grandmothers can create.
16. Yogurt e Fragola by Elvis Bogicevic of the La Piazza ice cream parlour in Bargteheide (the German ice cream parlour that came second at the Hamburg stage of the competition, with the extremely high approval of the general public panel). A flavoursome strawberry from the North of Germany which thrives thanks to the long days typical of summer in these areas, it is presented to the European public accompanied by a classic fresh yoghurt for moments of sheer pleasure.

Advance ticket sales at discounted prices at: www.gelatofestival.it/it/biglietto
other News