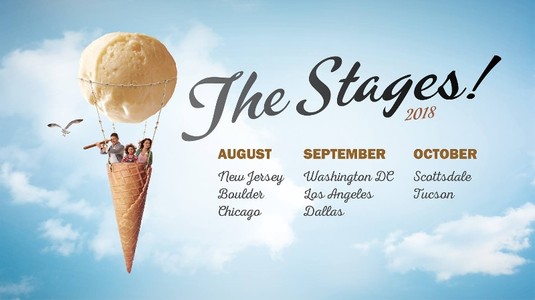 CHICAGO, IL. (May 17, 2018) – The Gelato Festival organizers today announced that they will be in attendance at this year’s National Restaurant Association (NRA) Show to begin accepting applications for Gelato Festival America, a competition shining a light on gelato chefs and artisans. The launch of the enrollment process will take place on May 19 at 9:30 AM (CT) with the official opening of the annual NRA Show at McCormick Place in Chicago, IL. At that time, the Gelato Festival team will gather for a photo-op at the booth of Carpigiani Corporation of America, Strategic Partner of Gelato Festival, to mark this special occasion. The NRA show takes place from May 19 to 22. 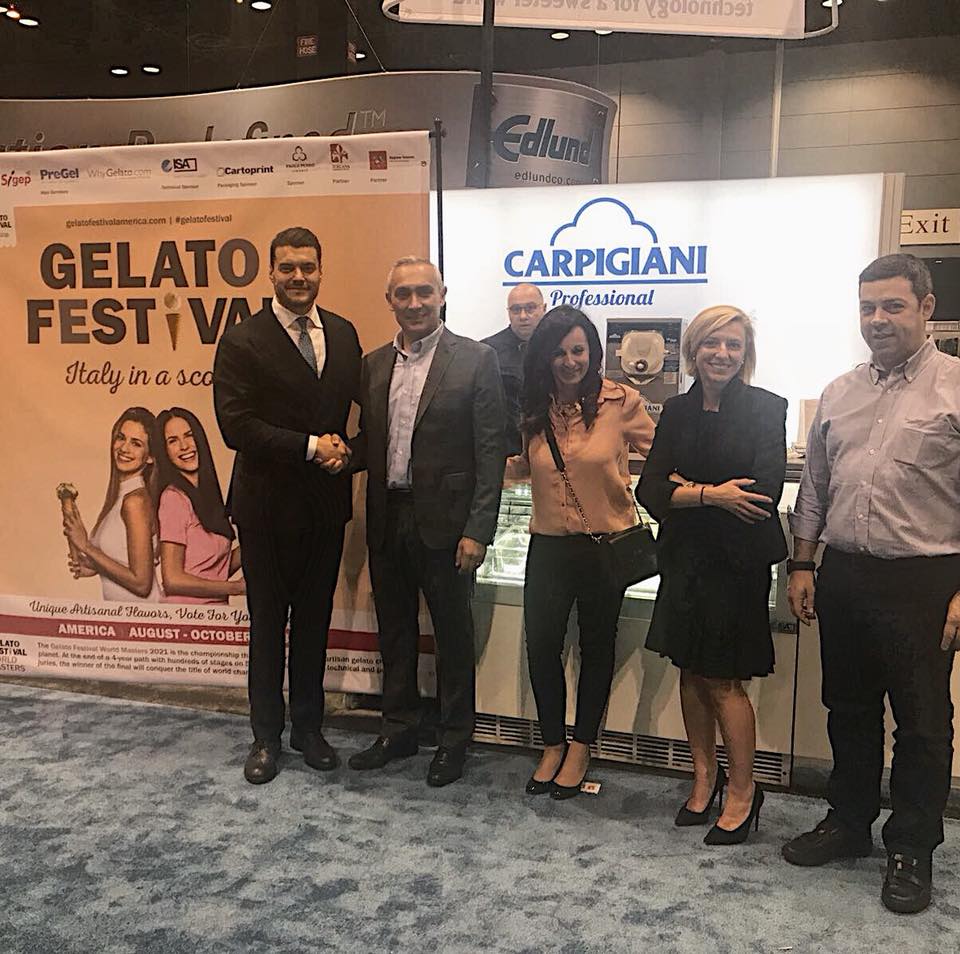 The Gelato Festival, organized in collaboration with strategic partners Carpigiani (world leader in the production of gelato machines) and Sigep - Italian Exhibition Group (international leading exhibition of gelato, artisan confectionery, coffee and bakery for the foodservice channel), is a major effort that has spanned years of competition and education within the food and gelato industry. Following the success of last year’s first Gelato Festival America, this year the Festival will tour eight cities in the US, with the winning gelato chefs from each city eventually competing in a grand finale and ultimately in the World Master Finals in 2021. Gelato or ice cream artisans and chefs who wish to compete in Gelato Festival America can submit their application directly at the trade show by visiting the booths of the Gelato Festival’s partners: Carpigiani Corporation of America (Booth: 4816, South Hall), PreGel (Booth: 6222, North Hall) and Sigep (Booth: 8248, North Hall). Additionally, gelato artisans and pastry chefs who wish to compete in the Gelato Festival America can also submit the application online from Saturday, May 19, at 9:30 AM (CT)
by visiting the website at  http://www.gelatofestivalamerica.com/BE_FAMOUS,
or write to team@gelatofestivalamerica.com for the chance to be selected.

Over the next few years, the Gelato Festival America will travel throughout the country bringing the art of gelato making to new heights, homes and restaurants. Artisans and chefs will go through a rigorous selection process in order to compete with a unique flavor created exclusively for the Gelato Festival. This is why presenting at the NRA, as a first stop, is key. The Gelato Festival team will be present at their Strategic Partner Carpigiani’s booth to engage industry professionals in a B2B relationship, while also promoting awareness of artisanal gelato and its on-the-road Festival competitions that reward the best gelato artisans and chefs.

Toscana Promozione Turistica Agency will be the strategic partner of Gelato Festival America in Washington DC. Alberto Peruzzini, Managing Director of Toscana Promozione, explains: “Gelato is one of the most iconic experiences of what is the true Tuscan style, made with elegant simplicity, creativity and love for details. 2018 is the year of Italian and Tuscan food in the world and gelato is one of the most important ambassadors of our gastronomic tradition. It is a symbol of the Tuscan lifestyle that is so loved by American travelers who today represent our second largest tourist market. This is why Toscana Promozione Turistica is today one of the main partners of Gelato Festival America.”

Over the next four years, Gelato Festival America will tour across the US with the goal of selecting the three most talented gelato makers who will participate in the Gelato Festival World Master 2021, a journey with hundreds of trials on five continents, evaluated by technical and popular juries that will culminate with the title of World Champion.

The Gelato Festival World Masters, launched this January in Italy, is a strategic project to promote artisanal gelato and the entire supply chain. The overall objective is to involve in the challenge 5,000 chefs from around the world, generate a 15% revenue increase in the sector and garner global media coverage valued at an estimated at 50 million euros - Gelato Festival America is an important part of this global project.

Chefs will participate in many qualifying trials including more than 100 "Gelato Festival Challenge" events sponsored by Carpigiani dealers (not open to the public); 50 various Gelato Festivals around Europe and the United States; three "Carpigiani Day" events that will be held in 2019 and 2020 in Anzola Emilia, Italy, Carpigiani headquarters.

The final 36 chefs from all over the world will participate in the Gelato Festival World Masters Final 2021, divided as follows among the 5,000 chefs involved in the qualifying events: and will include three finalists from the US:
4 chefs from:
Italy

3 chefs each from:
Germany
Japan
US/Canada
Rest of Europe

1 chef each from:
China
Argentina
Poland
Austria and Eastern Europe
Australia and New Zeland
India
Best under 30 European (winner of Next Generation, competition to be held in 2019 in Florence)
All Stars (Florence, September 2018) with the Gelato Festival champions from its inception until today)

ABOUT THE GELATO FESTIVAL
Since 2010, the Gelato Festival has had nine editions with more than 2,200 artisans competing in 64 Festivals throughout Europe, traveling almost 30,000 miles. The Festival is coming to America to once again share a piece of rich Tuscan culture and over the next three years will hold 22 Festivals and two American finals. In the end, the best three gelato chefs of US will be selected to participate in the Gelato Festival World Masters World Wide Finals in Italy 2021.

In the United States, the purpose of the Gelato Festival runs much deeper than just experiencing taste-bud tingling, serious flavor combinations that you can only find in artisan Italian Gelato and Sorbet. According to Daniele Palazzoni, General Manager of Gelato Festival America, “After the huge success all over Europe, and our first edition of the Gelato Festival in the USA in 2017, we realize that Americans really do love Gelato—maybe even more than ice cream. It is our goal to make certain that every American gets to taste what real Italian gelato is like and to spread the culture of artisan Italian gelato throughout the world’s largest consumer market for frozen desserts, focusing on the higher quality of this product compared to all others. Together, with the best gelato industry players, we will help artisans and chefs build their own successes in the United States market. With more multiple stops on our tour over the next years, we will be visiting a city near you, obviously, with the best gelato ever.”

Thanks to the partners and sponsors of Gelato Festival America:

Strategic Partner: Carpigiani – Carpigiani Corporation has been serving the foodservice market since 1946. Carpigiani is the leading manufacturer of gelato equipment in the world. Carpigiani also hosts the Gelato University, providing unparalleled professional education on frozen desserts for future gelato entrepreneurs, and the Gelato Museum, one of the “coolest” museums in the world, founded in 2012 and dedicated to the history of gelato. For more information, visit https://www.carpigiani.com/usa/?langid=7&lngid=7&stid=11 - gelatouniversity.com/usa - gelatomuseum.com.
Gelato World Tour – Launched in May 2013, this international event, whose second edition culminated in the September 2017 Grand Finale, was created to spread the culture of gelato to general public throughout the world. Starting 2018 is a partner of Gelato Festival World Masters.
Strategic Partner: Sigep – Italian Exhibition Group – Sigep is the International Trade Show of Artisan Gelato, Pastry, Bakery and the Coffee World of Italian Exhibition Group. Next edition:

Rimini Expo Centre, from 19th to 23rd of January 2019. The event has undisputed international leadership as trade fair for professional operators all over the world. For more information, visit http://en.sigep.it/
Main Sponsor: PreGel America – a global developer, manufacturer, and distributor of specialty dessert ingredients, with North American headquarters in Charlotte, NC, and official supplier of gelato ingredients for Gelato Festival America. For more information, visit https://pregelamerica.com/
Main Sponsor: WhyGelato.com – A gelato-inspired web resource created to spread the culture of gelato throughout the U.S. via consumer education and support of entrepreneurship in gelato-based specialty desserts. For more information, visit https://whygelato.com/
Technical Sponsor: ISA – Isa was founded in Umbria, in the heart of Italy, in 1963 and produces, in its region and distributes worldwide, refrigerated display cabinets and custom furnishings for public premises. It has established itself in professional refrigeration offering innovative products with the highest technology and reliability. For more information, visit https://www.isaitaly.com/
Packaging Sponsor: Cartoprint
Sponsor: Paolo Penko – The creator of the Gelato Festival gold plated Medals. An Italian jeweler who creates unique handcrafted designs that connect with rich Italian culture. His shop is located in Florence, Italy, a few steps from the Duomo. He works with his wife and his son to create jewelry in accordance to the ancient techniques of the Florentine goldsmith tradition. For more information, visit http://www.paolopenko.com/
Toscana Promozione Turistica Agency - The Tuscany Regional Government Agency responsible for promoting tourism. Its main objective is to contribute to the promotion of tourism flows throughout the region, thus consolidating Tuscany’s presence in traditional markets and developing it in emerging markets. Through participation in major trade fairs, B2B workshops and road shows, Toscana Promozione Turistica aims at enhancing the encounter between Tuscan tourist offerings and the international trade. And, at the same time, it launches online and offline promotional campaigns to drive Tuscany towards the end user: the tourist.  http://www.toscanapromozione.it/