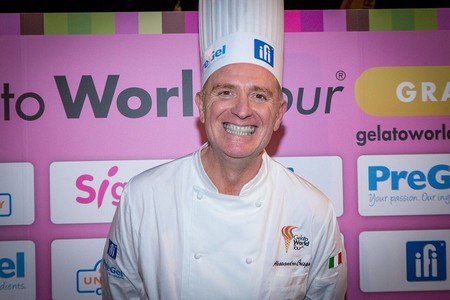 Rimini, 11 September 2017 – The “World’s Best Gelato”, crowned on September 10, 2017, in Rimini at the Grand Finale of the Gelato World Tour organized by Carpigiani Gelato University and Sigep – Italian Exhibition Group, comes from Italy. The name is as simple as the flavor is delicious: “Pistacchio”, the fusion of three different Sicilian pistachios, two from Bronte and one from Agrigento. It was created by the artisan Alessandro Crispini from Gelateria Crispini in Spoleto (Perugia), who added the refined Cervia salt to enhance the taste by giving the flavor an extraordinary sapidity. The rain didn’t stop the sweetest competition in the world devoted to artisanal gelato with an open laboratory where 2.500 kg of fresh gelato were produced in three days for 50.000 registered visitors.

“I am really excited and I didn’t expect to win”, reveals the winning artisan. “Pistachio may be considered a trivial flavor, but through an in-depth study of the raw materials I created something only apparently simple but in fact very complex. The three varieties of pistachio are roasted for 24 hours, then seared with sugar and Madagascar vanilla berries. I’m honored the flavor was so much appreciated!”. Crispini, emotinally moved during the awards ceremony, dedicated the victory to his pregnant companion.

Guido and Luca De Rocco, father and son of Italian origin, residing in Germany, won the second place with their flavor “Tribute to Venice”, an Uva Fragola grape sorbet with caramelized nuts whom devoted the flavor to their homeland lovingly called “La Serenissima”.

The third place was won by “Amor-Acuyà” by the young Colombian gelato artisan Daniela Lince Ledesma from Medellín. This exotic flavor mixes three different sensations: the sweet and sour taste of the passion fruit, the cream and Colombian 65% dark chocolate obtaining the perfect bittersweet balance.

Technical Jury’s Special Mentions (Tied)  given out by Luciana Polliotti, honorary president of the Jury and curator of the Gelato Museum Carpigiani: Both Tied

Popular Jury Special Mentions (Tied) (The flavors that recieved the most votes by the ticket golding public):

- "Gorgonzola and Pear variegated with Fig and Walnuts” by Michael, Brian & Teresa O’Donnell of the Gelateria 48 Flavours in Adelaide – Australia.

Foreign Press Association in Italy Special Mention given out by Alfredo Tesio, President of the Gruppo del Gusto:

- "Sapore d’Amatrice” by Daniele Mosca of the Gelateria, Il Gelatiere in Amatrice - Italy

- “Pistacchio” by Bruno di Maria of the Ristorante Madison in Realmonte – Italy.

There were 36 flavors in competition presented by as many teams from 19 different countries, with 17 women artisans. The Gelato World Tour Village was positioned along the promenade of Federico Fellini Park where the winners were crowned in a year where gelato consumption saw a record +10% in Italy.

But this is not all! On Friday and Saturday, the 36 teams took part in the Tonda Challenge by IFI, the contest for which they had to create a perfect 60-grams gelato cup on the first try. Linda Peterlunger from Eismanufaktur Kolibrì in Wolfurt, Austria, won the prestigious golden spatula. Lara e Silvia Pennati of Formazza Agricola di Formazza (VB) won the the Guerrilla Gelato event receiving a Gelato Coolbox from IFI as the prize for creating the best of all the cereative videos made during the first 2 days of the event.

The winners of the competition were able to reach the sky with gelato by attempting create the highest cone of the world, called “Stack it high show down” by PreGel, were Luca & Guido De Rocco with 13 scoops stacked high in just 20 seconds.

The annual consumption of artisanal gelato across the globe is worth 15 billion euros, with an average growth of 4% per year. The SIGEP Observatory (the world's leading artisanal confectionery trade show, with the 39th edition scheduled to be held on 20-24 January 2018 at the Rimini convention center, organized by the Italian Exhibition Group) has estimated that artisanal gelato consumption in Italy during the summer of 2017 increased by 10% with peaks of 15% in tourist areas.

In Europe in 2016 there were more than 60,000 gelato shops, of which 39,000 in Italy (10,000 pure gelato shops and 29,000 cafés and pastry shops also serving gelato), with 150,000 employees. In Germany there are 9,000 gelato parlors, of which 3,300 are dedicated solely to gelato. Spain has 2,000 gelato shops. In South America, Argentina and Brazil account for the largest share, with 1,500 and 500 gelato shops respectively. The consumption of artisanal gelato is constantly growing in the United States, where there are about 950 gelato shops. The word “gelato” denotes a premium product so much so that large ice cream companies (industrial production) have been attempting to add value by using the name in marketing their products in an over saturated retail ice cream market. It is interesting to note how American statistics refer to real artisanal gelato more and more frequently.

The Gelato World Tour, which is supported by the Italian Ministry of Foreign Affairs and of Economic Development, as well as the Regione Emilia Romagna, is the first international traveling competition in search of the best flavors in the world. The Tour is directed by Carpigiani Gelato University, the world’s most renowned school for successful gelato entrepreneurs, and Sigep – Italian Exhibition Group, for thirty-eight years the world’s premier trade show for traditional gelato and pastry (next edition from 20 to 24 January, 2018, Rimini). Main Partners are IFI, leading manufacturer of gelato display cases, and PreGel, the world’s largest producer of ingredients for gelato and pastry. Technical sponsors: ”easy-to-digest” lactose free milk, yogurt and cream are provided by Zymil (Parmalat); Hiber; Medac; Metalmobil; Paperlynen Pal Caps; Cono Roma; Screams; Gelato Museum Carpigiani and Quartopiano suite restaurant di Rimini.